The environmental pollution and hazards have become the prime topic of concern in the twenty-first-century world and a warning to existing mankind. The researchers and chemists are also putting their way forward to combat the alarming situation across the world. In this context, reactions that are being carried out in water have attracted attention from the past decade. The conventional organic synthesis relies profoundly on organic solvents for a huge number of reactions, mainly for dissolving the compounds and assisting chemical reactions, because a number of reagents and catalysts are either unsuited or immiscible in water. In spite of the constraints, substantial efforts have been dedicated to overcome the problems because water not only reduces the environmental hazards of organic synthesis but also may benefit chemical reactions by delivering unforeseen selectivities and reactivities. The development of water-compatible/water-stable catalysts has emerged as a troubleshooter, eliciting a quantum leap in organic synthesis in water. Use of water has simplified the workup procedure too, as organic compounds are typically insoluble in water, extraction with suitable organic solvents can separate the compounds from catalysts, and the catalysts can also be separated and reused by centrifugation and filtration. This review deals with advances in catalytic methods under aqueous medium over the past few years. 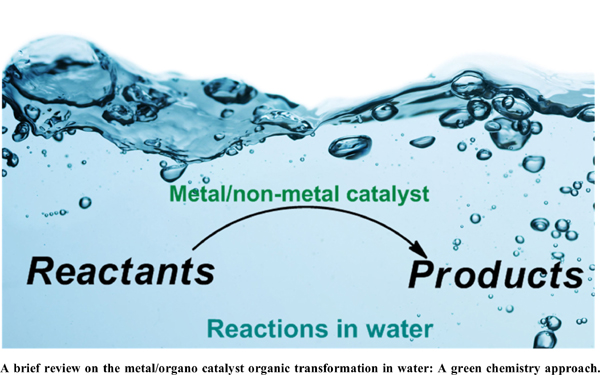